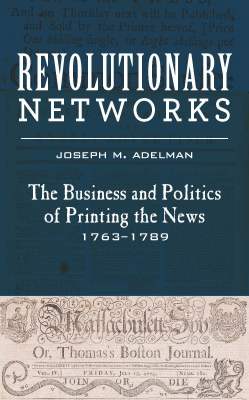 During the American Revolution, printed material, including newspapers, pamphlets, almanacs, and broadsides, played a crucial role as a forum for public debate. In Revolutionary Networks, Joseph M. Adelman argues that printers—artisans who mingled with the elite but labored in a manual trade—used their commercial and political connections to directly shape Revolutionary political ideology and mass mobilization. Going into the printing offices of colonial America to explore how these documents were produced, Adelman shows how printers balanced their own political beliefs and interests alongside the commercial interests of their businesses, the customs of the printing trade, and the prevailing mood of their communities.

Adelman describes how these laborers repackaged oral and manuscript compositions into printed works through which political news and opinion circulated. Drawing on a database of 756 printers active during the Revolutionary era, along with a rich collection of archival and printed sources, Adelman surveys printers’ editorial strategies. Moving chronologically through the era of the American Revolution and to the war’s aftermath, he details the development of the networks of printers and explains how they contributed to the process of creating first a revolution and then the new nation.

By underscoring the important and intertwined roles of commercial and political interests in the development of revolutionary rhetoric, this book essentially reframes our understanding of the American Revolution. Printers, Adelman argues, played a major role as mediators who determined what rhetoric to amplify and where to circulate it. Offering a unique perspective on the American Revolution and early American print culture, Revolutionary Networks reveals how these men and women managed political upheaval through a commercial lens.

For more information, including how to order, visit the Johns Hopkins University Press website.

“Who Tells Your Story: Hamilton as a People’s History,” in Historians on Hamilton: How a Blockbuster Musical is Restaging America’s Past, edited by Renee C. Romano and Claire Bond Potter (New Brunswick, NJ: Rutgers University Press, 2018), 277-96.

“News in the Age of Revolution,” with Victoria E.M. Gardner, in Making News: The Political Economy of Journalism in Britain and America from the Glorious Revolution to the Internet, edited by Richard R. John and Jonathan Silberstein-Loeb (New York: Oxford University Press, 2015), 47-72.

“Trans-Atlantic Migration and the Printing Trade in Revolutionary America,” special issue on The Worlds of Mathew Carey, guest edited by Cathy Matson and James N. Green, Early American Studies 11, no. 3 (2013): 516-44.

View the article in PDF.

View the article at Project Muse.

During the American Revolutionary era, immigrant printers and their North American–born counterparts faced many struggles to secure sufficient business to remain solvent and simultaneously navigated complex political situations. Immigrant printers also faced the challenges of integrating themselves into extant commercial and political networks. They formed a substantial minority within the trade, making up nearly one-fourth of the master printers between 1756 and 1796. This essay examines the experiences of this group of printers, including Mathew Carey, and it focuses on their individual efforts to succeed in founding and furthering the publishing industry in the United States. In so doing, it explains how immigrant printers integrated themselves into American political and commercial information networks and highlights the vital role of their social capital and skills in achieving these printers’ goals during this era.

“‘A Constitutional Conveyance of Intelligence, Public and Private:’ The Post Office, the Business of Printing, and the American Revolution,” Enterprise & Society 11, no. 4 (2010): 409-52.

View the article in PDF.

This essay argues that American printers motivated by a deep commercial interest in fast and effective communication worked to overturn the British imperial postal service in 1774 and 1775. Printers enlisted merchants and members of the revolutionary elite, who also relied on long-distance communication through the post office for their own commercial and political purposes, to provide financial and political support. In making their case, printers mobilized a broad array of political ideology and imagery already familiar to colonists during the decade-long imperial crisis, emphasizing the political necessity of replacing the imperial institution. At the same time, they uncontroversially asserted that a new American post office would safeguard their precarious commercial ventures. The essay therefore demonstrates that printers were not “mere mechanics” but actively shaped the political debates leading to the American Revolution as part of a process that scholars have recently highlighted in a work on the economic and commercial influences on the Revolution. Furthermore, it grants the post office its due as part of the Habermasian public sphere; although understudied, the post office—both as a physical space and as a network through which information could travel—was a crucial means by which Americans developed a national infrastructure for political communications. Exploring the overthrow of the British post office, and the creation of an American post office, reveals an understudied but crucial episode to explain the symbiosis between politics and commerce during the American Revolutionary era.

“A Transatlantic Culture of News?” Review of Uriel Heyd, Reading Newspapers: Press and Public in Eighteenth-Century Britain and America, by Uriel Heyd, Common-place, 13, no. 1,October 2012.

Review of Marcus Daniel, Scandal and Civility: Journalism and the Birth of American Democracy. Jhistory, H-Net Reviews, September 2011. View on H-Net website or in PDF.

Review of David Henkin, The Postal Age: The Emergence of Modern Communications in Nineteenth-Century America, Technology and Culture 49, no. 1 (2008): 272-273. Link to review through Project Muse.